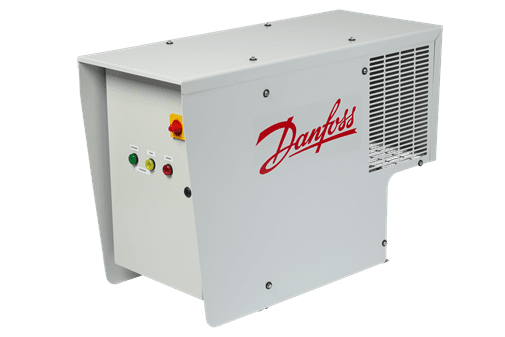 Non-condensable gases (NCGs) present a challenge for industrial refrigeration systems. Since NGCs are unable to condense inside a condenser, they can have a serious impact on the operating conditions, energy efficiency, and lifetime of a system. Air is the most abundant non-condensable gas impacting industrial refrigeration systems, often entering during operation or service.

The Danfoss Intelligent Purging System (IPS) is an easy-to-install, standalone, and self-contained purging unit designed to remove non-condensable gases from up to eight points in an industrial ammonia refrigeration system, resulting in a more energy-efficient plant with lower power consumption.

“We are very excited about the launch of our new Intelligent Purging System. Not only do we continue the Danfoss tradition of delivering innovative products to the market, but we also hold true to our promise of responding to the growing demand for smart and connected products,” said Industrial Refrigeration Marketing Manager Anders Olsen.

Every aspect of the IPS is designed to provide a simple, safe, and cost-effective installation and hassle-free service. As a result, the IPS was constructed as a stand-alone design with as little as down to one mechanical connection, one electrical power connection, and one Modbus RTU connection. The plug-and-play setup wizard enables initialization in as little as 10 minutes and minimizes the risk of errors during commissioning.

The IPS features an automatic purging function based on NCG buildup, as opposed to the purely time-based purging found in other models, resulting in time- and energy-efficient purging. The IPS continually monitors the differential pressure between the system refrigerant and purging refrigerant, resulting in higher efficiency, a lower concentration of residual ammonia and a reduced compressor load.

The IPS runs self-diagnostics on an ongoing basis and will shut down should the need arise. Having only one integration point with the main system reduces risk in the event of issues with the main system. The IPS logs data on past purging cycles which makes it easier to identify system issues, thereby keeping the system running at peak efficiency.

“The IPS’s smart algorithms adapt to changing system conditions and self-optimize, while giving our customers the ability to remotely monitor activity at all times by connecting to the supervisory system. We are in no doubt that application intelligence and the ability to communicate with our field devices and mechanical products is the future of our industry,” said IPS Product Manager John Kelly.